Every century a sacrifice must be made. Myths and legends tell tales of a great age of stone that will sweep in and petrify everything in its wake, should this sacrifice not be made. No one knows if the legends are true, yet no one dares question tradition. This is where your story begins; you are Liam.. you are the sacrifice.

Stoneguard draws inspiration from games such as dark souls and doing so attempts to deliver intense unforgiving combat and a dark and moody atmosphere. The player attempts to navigate through a series of mines while avoiding traps and enemies. Should the player die to an enemy, they will be sent into the spirit world, where the enemies wander as the lost ghosts of the previous sacrifices. From this world the player can talk to the ghosts, scout ahead and disarm traps that are causing trouble.

The game plays like a top down hack-and-slash. The player moves around with WASD and turns using the mouse. The game features a spirit world which the player will get thrown into whenever they die. In order to revive they need to backtrack to the last revival stone they activated. In this way the spirit world serves as a restart mechanic. However, we wanted to extend it. Instead of simply walking back we wanted the player to see and talk to the spirits of his foes in order to learn more about the world and why they are there. 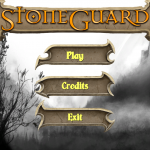 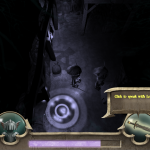 An interesting mechanic introduced in this game is the willpower system. The player does not have health but instead a willpower bar. This bar has several different uses. The bar has two different values of interest; current effective willpower and current max willpower. Whenever the player attacks the current effective willpower goes down. As the willpower of the player decreases their attack speed will increase as they go into a frenzy. Should the bar reach 0 through attacking nothing will happen though. The second value (current max willpower) goes down every time the character is struck in combat. However, the willpower is consumed at the bottom of the bar, meaning that if the player has reduced their effective willpower through attacking they can get killed in a single hit no matter how high their max willpower is. This means that the player must weigh the benefit of increased attack speed against the risk of dying and thus creates an interesting play between traditional stamina and health being tied together.