Set in a distant future; war is coming. You are part of the testing team prtotyping a new suit made for fast paced couriering. Fitted with zero-friction boots and various devices made for three dimensional movement, the suit will allow expert couriers to transport news and information safely from command to their units. So get in there and strap up, it’s going to be a wild ride. 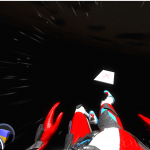 Flying towards the end 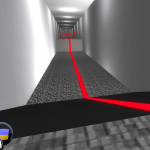 Asserting the next challenge 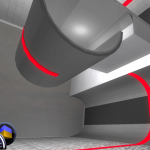 Testing out the attractor

Momentum is designed to be a puzzle platformer in the sense of setting up an environmental challenge of getting from one platform to the next. Inspired by the structure of portal, the game is set up as a series of tests. Each test serving as both game and tutorial.

The core game play lies in the players ability to slide along the ground continuously gaining speed. This speed is then used to slide along walls, propel the player around loops, and even along the ceiling. The player is thus tasked with finding the best way to gain and keep momentum while navigating the levels.